Strike a Pose, there’s quite a lot to it, actually.

I still have time on my hands here – but have some exciting news to share in October!

In the meantime, I have been thinking a lot of late about different genres of music, and the way they have their own sense of style.

One of my favourite performers is Madonna. Whilst for the most part, Madonna’s mega hit, Vogue, is about enjoying oneself on the dance floor, its links to fashion, how we look and in particular how we shouldn’t care what we look like scream through loud and clear. Madonna is of course, a prime example of an icon whose style has been reinvented time and time again throughout her astonishing 30-year career and has become just as influential as her incredible library of chart toppers.

Her latest experimental “character” was that of “Madame-X”, a secret agent spy who according to Miss Ciccone herself sleeps with one eye open, travels the world with one eye shut and is covering up one of her eyes as she has been wounded. Eva Peron this isn’t but if anyone can get away with it, it’s Madonna, to me, the Queen of Pop.

Reflecting on the endless photos which exist of her incredible transformation, I can’t help but think about my own style as a classical crossover soprano. Most people associate our world with the most magnificent dresses. I am ever so lucky that I now have a lovely collection of these which I enjoy performing in; my favourites being my two Suzanne Neville dresses; my red one which I wore on my “Stars Are Rising” tour to promote my first Number 1 album, and my white one which was my wedding dress and instead of putting into storage never-to-be worn again, I got it dyed pink, added some glitter and transformed it for stage performances, which led to me wearing it on the well-known UK TV show Songs of Praise. 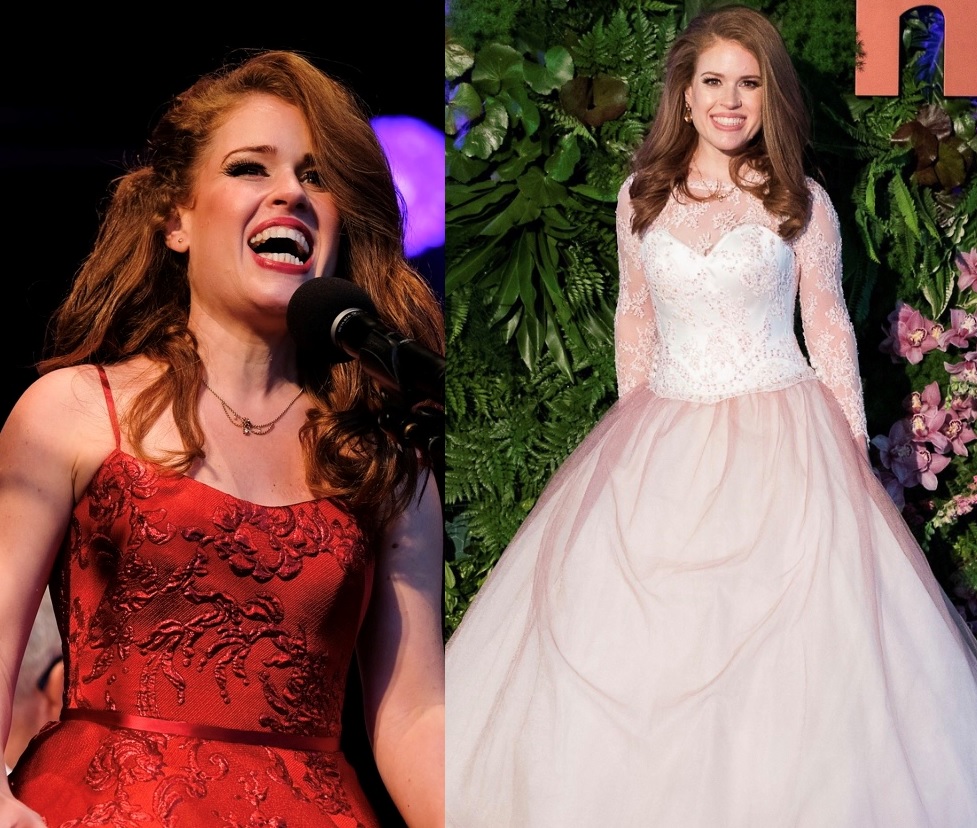 As a little girl, I could only dream of wearing gowns as beautiful as these, and when the comparisons to Disney Princesses are mentioned, one can publicly blush but secretly feel a surge of goose bumps that anyone could be as kind to pay such a glowing compliment.

However, thinking about Madonna and looking through the pages of my favourite fashion magazines I am often found debating with friends about what the other fashion possibilities could be for the classical crossover singer. Is it time for a reinvention?

In the CD sleeve of Stars Are Rising, you can see me donning a leather jacket, albeit with a stage dress underneath. The shoot took place in an “edgy” area of East London and the backdrop just needed a little something extra to make it work. Aside from this though, my look has always been the “please can someone zip me up at the back” huge dress.

Throughout my career I have covered songs by Bowie, Slade, The Beatles, The New Seekers, Take That and even The Stone Roses so, given that we are Classical Crossover where many of the songs we perform were originally from a totally different musical genre, what if we “crossed over” our look too?

With live performances coming back I decided therefore to have a little fun, a bit of silly escapism, and try out five different looks and characters. Not to be taken too seriously, I therefore present to you: Swing Joanna, Woodstock Joanna, Punk Joanna, Goth Joanna and Shell Suit Joanna for your consideration.

Arriving in her ’57 Chevrolet to perform at a socially distanced drive-in, Swing Joanna is a big fan of cocktail dresses, milkshakes, Little Richard and makes her on-stage appearance with an almighty “A-wop-bop-a-loo-bop-a- wop – bam-boom !”. 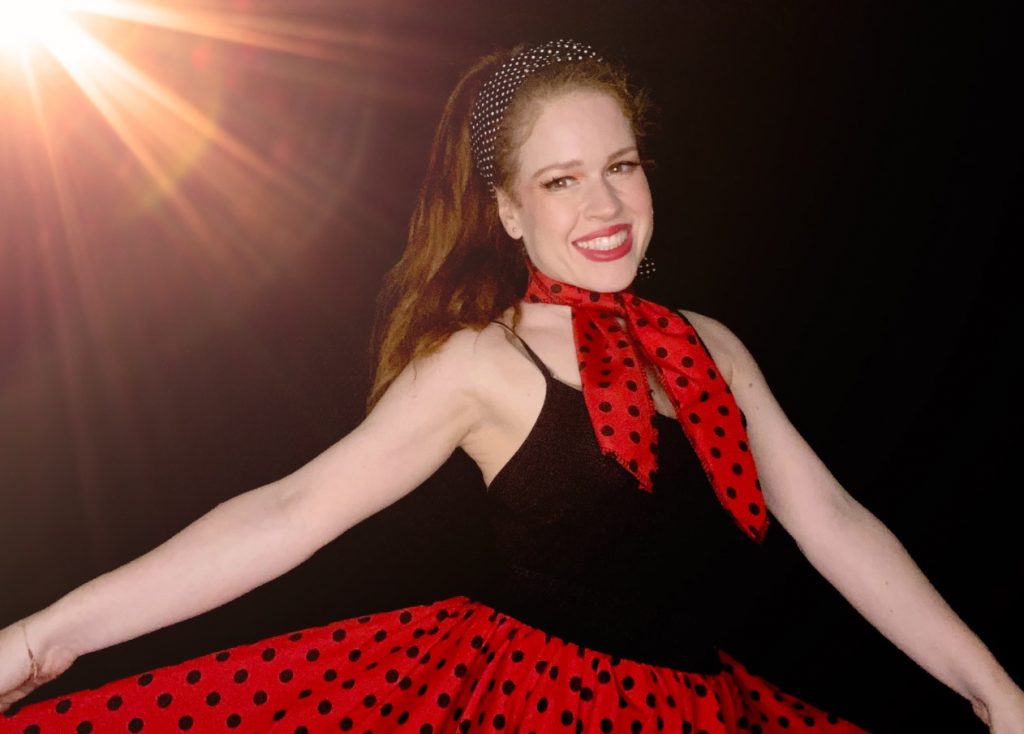 Make up wise, this was relatively simple to apply and I couldn’t help but smile as the outfit was so comfy and light! Not quite sure how the skirt would have behaved if a gush of wind had come my way if wearing this in a proms show, but this was a solid start to my experiment.

Emerging through a fog of ahem, “herbal” smoke around a campfire with a tambourine and bells, Woodstock Joanna has walked miles through mud to chant the night away with her “best friends”….which she only met 1 hour ago. 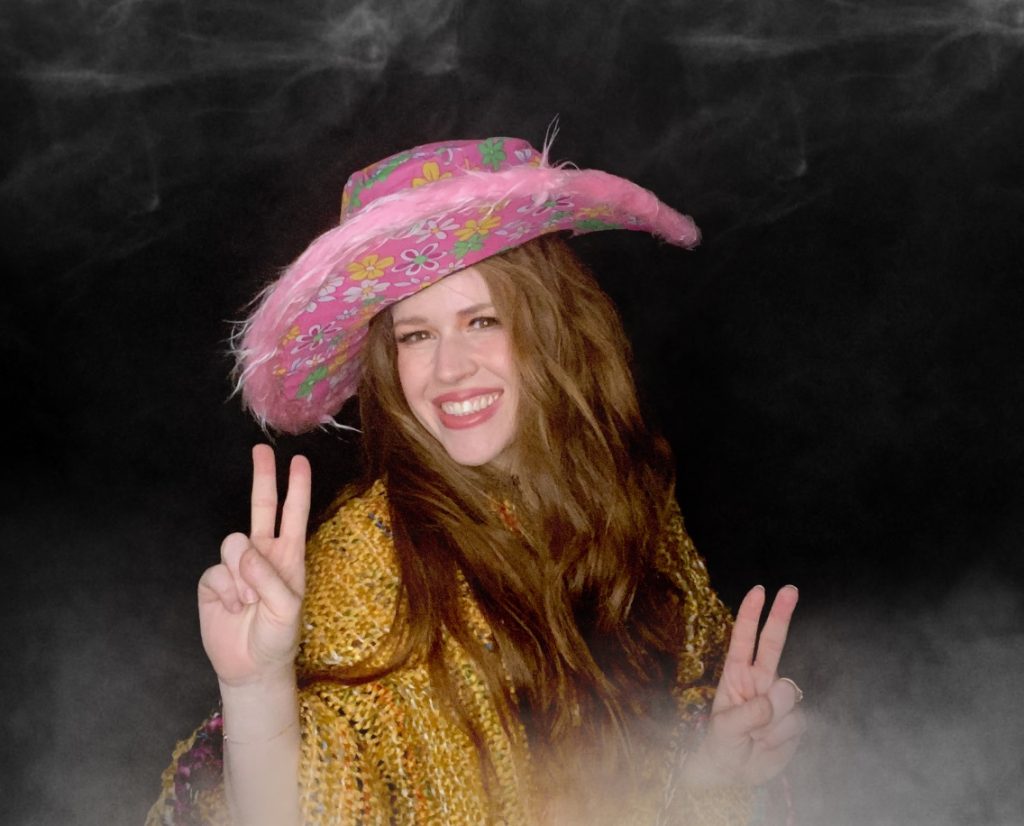 The obvious route here would have been to have made a daisy headband but 1) My husband, James cut the grass this weekend and 2) I’ve finally found a purpose for the hat I bought on a whim years ago. It would take a brave soul to wear this and try and blend in with an orchestra wearing their smartest, but it has potential!

Hanging off the gates at Buckingham Palace with abandon, Punk Joanna has exploded onto the Classical Crossover scene with the energy of a rocket and the linguistic skills of a toilet. It’s all a show of course and back home, Punk Joanna likes nothing more than sipping from a mug of cocoa and eating scones. 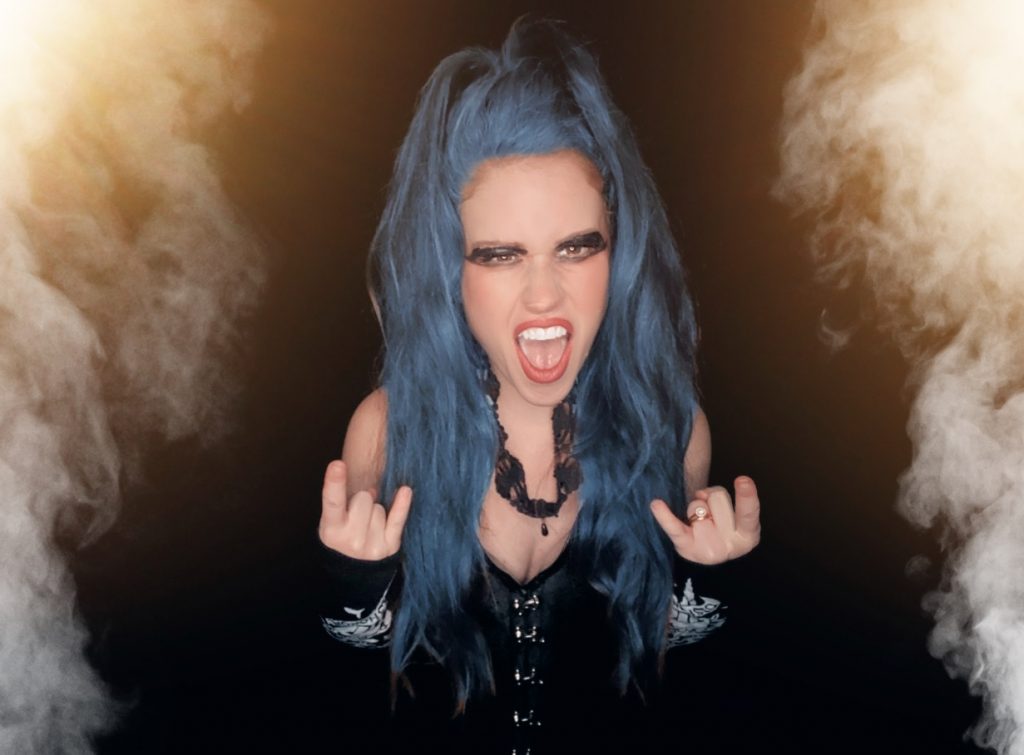 All I can say for this is thank goodness I didn’t actually go into London town to take the picture. Whilst this was probably as far away from my usual style as you could imagine, the fingerless sleeve gloves were REALLY cosy and it was liberating to apply furious looking make up.

Untangling herself from a weave of spiders’ webs, Goth Joanna is mysterious, complex yet curiously exotic. Always found creeping around Victorian cemeteries for goodness knows what reason, Goth Joanna enjoys performing to any brave passer bys, though judging by her face, you really wouldn’t know it. 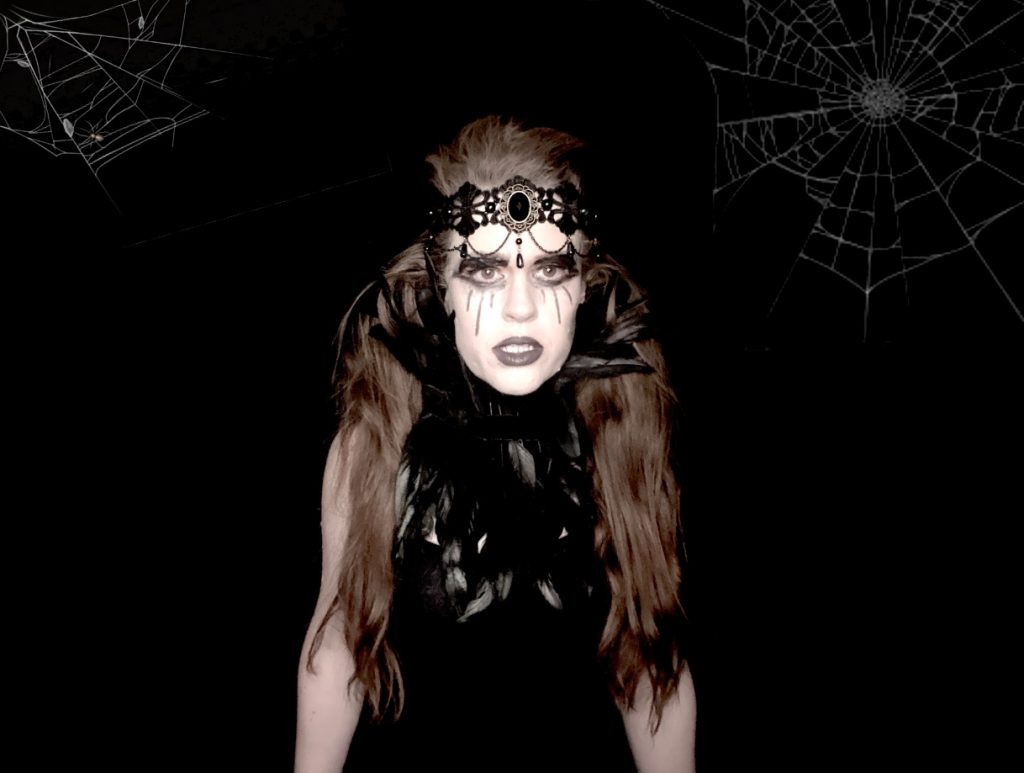 I actually love a lot of Goth Music including The Cure, Siouxsie and the Banshees and Joy Division but given that one of my success factors whilst scoring these is “colour”, I didn’t hold up much hope when getting dressed. However, tones aside, I loved the feather neck scarf and threatening James that I’d “Zoom Bomb” one of his online meetings whilst showing off my make-up, was a highlight of the year.

Rolling onto an LED lit stage floor, Rubik’s Cube in one hand, Sony Walkman in the other, Shell Suit Joanna is a bubble-gum loving Neon clad bundle of energy who zips through her set list whilst insisting that the songs would sound “Way more fun if all the violins were replaced with a Casio Synthesiser. 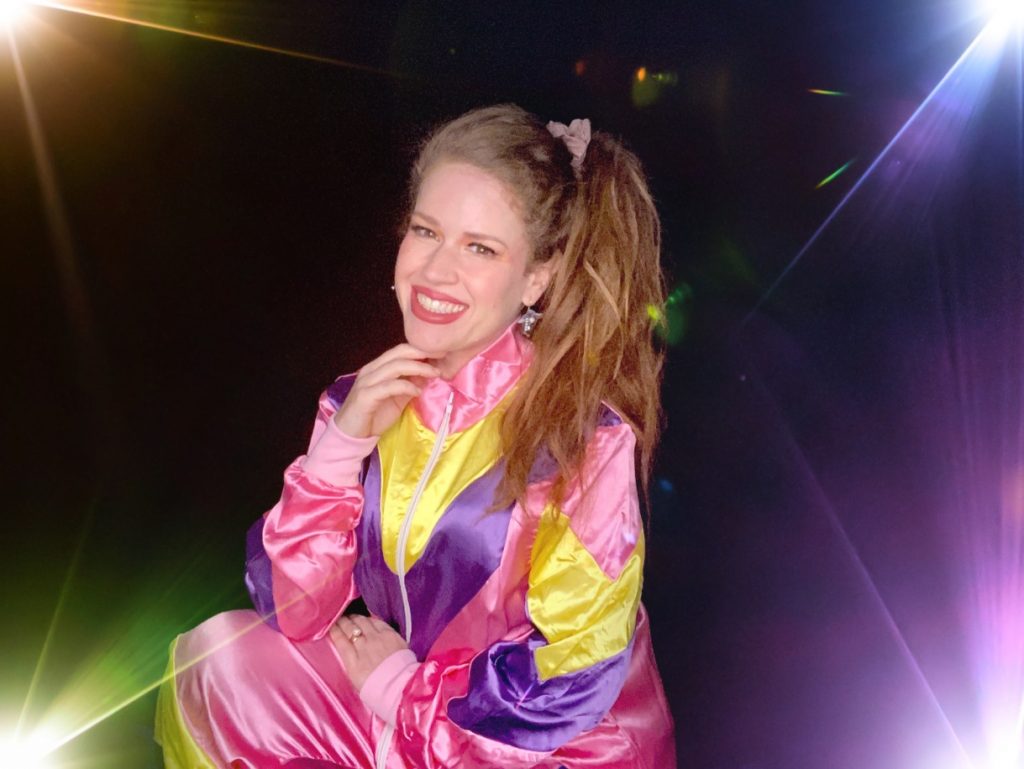 Truth be told, I am a child of the 80s and 90s AND I did own my own colourful shell suit. I remember seeing news reports that they were a massive fire hazard so may not be wholly safe if there is a proms pyro finale but I love it so much that I’m planning on wearing it out for my daily dog walk… apparently this means that I’ll be doing that walk alone!

So, there you have it, my flammable shell suited, alter ego wins my own game of alternative styles Top Trumps but the big question is, would it beat my treasured dresses? For me, I still love wearing them and they all hold incredible memories of moments which I’ll remember for the rest of my life. But what do you think? Should we “ditch the dress” and go way out there with whatever we feel like because as Madonna tells us, ‘Beauty is where you find it’ and ‘all you need is your imagination.’

With the pandemic still as prevalent, and new regulations around social gatherings coming in as I type this, the lyrics ‘look around, everywhere you turn is heartache’ feels all too true right now. But whilst we have music, and colour, and fashion and creativity, I prefer ‘Come on, Vogue, let your body move to the music’!

Have a great month everyone, and I will see you all in October!