Joanna and Mary-Jess to perform in the Forest at “A High Beach Harmony”.

Joanna is delighted to be performing with the stunning Mary-Jess in High Beach Church in the middle of Epping Forest on Sunday, December 4.

The concert will be from 3pm - 5pm with tickets costing £12 available here.

Having first performed together at "Songbirds" in London earlier this autumn, the two sopranos have joined forces to co-headline a Christmas show in Joanna's home town. They'll be singing well known duets, carols and exclusive material off each of their albums.

Mary-Jess, who is fluent in Mandarin, shot to fame by winning the Chinese version of "The X-Factor", where she was seen by over 70 million viewers. Since then she has toured with Russell Watson, sang to royalty in Windsor Castle, appeared on numerous national TV programmes both in the UK and in China, and was chosen to sing the Downton Abbey theme tune.  She even performed at the FA Cup Final in Wembley Stadium singing 'Abide With Me' in front of a live audience of 90,000 people and a worldwide television audience of 300 million people. Mary-Jess' latest album, "Prayer to a Snowflake" is currently available on pre-order here.

Speaking of the concert in December, Joanna said "I can't wait to sing with the beautiful Mary-Jess again, this time in our very first joint headline show. I am proud to call her my friend and to share the stage with someone so talented. I look forward to seeing fans old and new for what should be a really magical afternoon." 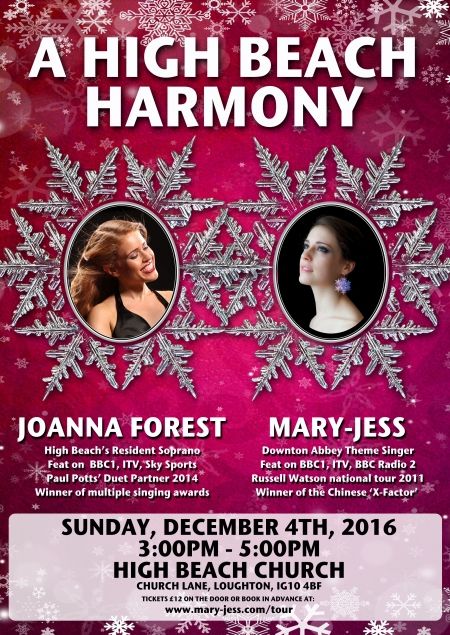