Official Classical Number One for Stars Are Rising

Joanna has rocketed straight into the Official UK Classical album charts at number one and in the process, has made chart history. This is the first time an artist with a debut album on an independent label has gone straight to Number One in the classical music charts. A magnificent achievement outselling established artists such as Alfie Boe and Andrea Bocelli.

“I am absolutely delighted to have achieved a classical number one album, with my debut album! I have a fantastic supportive fan base, but it’s always daunting when you’re not signed to a major label to break into this tough genre of music, but I’ve shown it is indeed possible and there is very much a place for independent artists!”

“We are absolutely thrilled Joanna has made it to Number One and we are so proud of all she has achieved. We knew this would be a special album, it’s a stunning debut - cinematic in its scale, dramatic in its tone and covers territory never before heard on a 'classical crossover' album.”

‘Stars Are Rising’ was recorded with The City of Prague Philharmonic and Arts Symphonic Orchestras and produced, orchestrated and conducted by Robert Emery.

Prior to hitting the top spot, Stars Are Rising received critical acclaim including the accolade of "Album of the Week" in The Sunday Mirror.

Since its release, tracks from the album have been featured on national radio including BBC Radio and Classic FM. 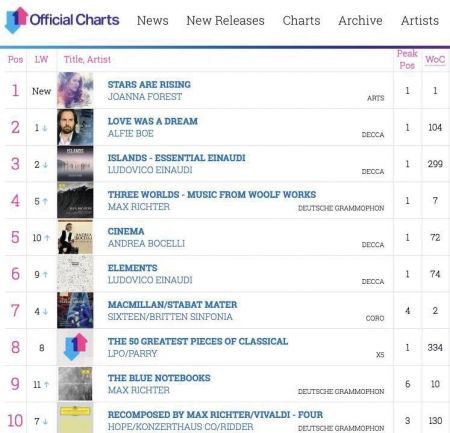