"Hi everyone, I am proud to reveal the very top secret and exciting project that I have been working on. I am so very honoured to be singing in duet with the incredible Daniel Koek,and supported by a 72 piece orchestra on a brand new single that has been written to celebrate the Platinum Wedding Anniversary of Her Majesty The Queen and His Royal Highness, The Duke of Edinburgh.

"The Royal Platinum Love Song" has been written by renowned composer of music for the Royal Family, Olga Thomas, and arranged and conducted by Robert Emery, who also produced my own album.

It will be released (more details coming soon!) on Friday, November 10 in time for their anniversary on November 20th. Proceeds will be going to Cruse Bereavement Care for which The Queen is a Patron of. It's a breathtaking song and I can't wait for you all to hear it. 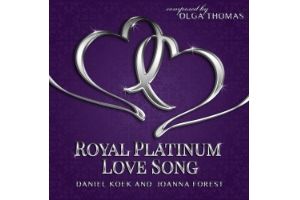