Joanna gets the double of two Number 1's in a year as the Royal Platinum Love Song shot straight to the top of the Classical Singles Chart. Recorded in duet with West End Superstar, Daniel Koek, the song was recorded to celebrate 70 years of marriage betwee The Queen and Prince Philip and was written by renowned composer, Olga Thomas.

Speaking of its success Joanna said "Wow. I can't believe it. I am so thrilled to sing on this beuatiful song for The Queen and for it to go straight to number one is very exciting. I would like to pay particular respect to Olga, who wrote the song, Robert Emery for his, as ever, brilliant arrangement, to Daniel for singing so amazingly with me, and of course to The Queen and Prince Philip on their wonderful life together. I am so happy for Cruse Bereavement who benefit from sales, they are such an important charity who help so many every single day.

It's been a truly fantastic 2017 with two number 1 records. Thank you to everyone who has bought and enjoyed my music." 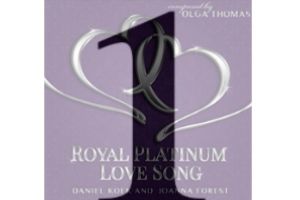